It’s a bit like buses, you wait ages for one then 4 come along at once, or rather it depends on which part of the country you are in.

A brave cashier managed to capture a violent mob who were smashing up a petrol station – but was forced to let them go when police failed to respond to a 999 call.

Petrol station worker Malik Mahmood, 29, locked himself in the shop with the five-strong gang and made an emergency call to police when they started wrecking the store.

The gang, wearing hoods, threw stock from the shelves and tried to smash their way out with a brick when they realised they were trapped, causing hundreds of pounds of damage.

Although terrified, Mr Mahmood stayed in the Birmingham city centre store with the gang for more than half an hour – until more yobs showed up and tried to break down the door so he was forced to let them go.

After 30 minutes, police phoned back to see if the gang was still there – after explaining they were too busy to attend.

Ok, at times the police might be a bit busy, but this was a potentially dangerous situation for the guy involved and might have got worse if in the end the thugs mates hadn’t turned up and Mr Mahmood hadn’t decided to let them out. Yet in another part of the UK…

Jacqui Thompson, author of the blog Carmarthenshire Planning Problems and More, was using her phone to record a meeting of Carmarthenshire County Council during an angry debate on the closure of a day club for local elderly people.

According to her blog, she was in the public gallery when the row over the day club broke out, and began filming proceedings.

She was asked to leave by the council chairman who called the police when she refused. Ten minutes later, four police officers arrived.

Mrs Thompson said: “I tried to argue my point but was then arrested in the Public Gallery for ‘breaching the peace’. I was taken outside the door, handcuffed, searched, my phone taken and marched out to the waiting police cars.

“I was then taken 30 miles to Llanelli police station where I remained handcuffed for another hour before being ‘processed’, and put in a cell for another two hours.”

Mrs Thompson also claimed that she was threatened with being kept overnight at the station unless she signed an “undertaking” not to film any more meetings.

I believe fellow blogger Sir Olly Cromwell is up to something similar in Bexley too.

It does seem that the police have a totally different set of priorities when it comes to who complains and how, it also seems to depend on how busy they are as to whether or not the law will be carried out on miscreants or indeed carried out against someone who was not actually causing a breach of the peace but doing something that strikes me as quite lawful as the standing order she is accused of having breached merely reads that members of the public and press may only be excluded if they are making a disturbance.Filming on a camera might be disturbing to the Council, but it doesn’t strike me as being a disturbance as such, nor any reason to get the police involved in such numbers or a completely over the top response by them.

I suspect that Mr Mahmood would have loved to see at least 4 officers make an appearance at his place of work, even an armed response team. But sadly he’s just an ordinary Joe, not a Council leader with a police budget.

Yes I’m comparing chalk and cheese, different forces and different times of the day and I don’t know what Birmingham plod were up to that was keeping them too busy. 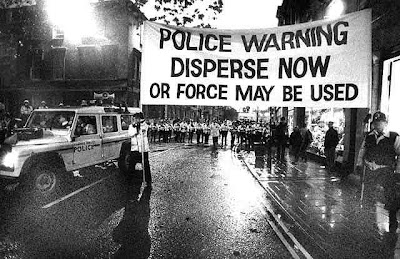 Well I do know they’ve been busy sorting out dispersal orders in case there is any trouble there.

POLICE in Birmingham have obtained a dispersal order for the city centre.
The order has been put place in consultation with Birmingham City Council following concerns from residents and businesses of anti-social behaviour.
Under the order, officers will have the power to move on any group of two or more people deemed to be acting anti-socially. Officers can also arrest anyone in breach of the order.
In addition, between 9pm and 6am, people dispersed aged 16 or younger and not under the supervision of a parent or adult, can be taken back to their homes.
PC Matt Evans, from the city centre neighbourhood team, said: “Seeking the dispersal order was a direct result of listening to the community’s concerns.
“Unfortunately the groups who are responsible for this behaviour are persistent and continue to behave anti-socially.
“The order will now give officers the power move on anyone intent on causing disruption to the wider community. The order will be used in conjunction with existing powers of arrest and only against those who have been identified as causing persistent problems.”
The dispersal order covers the heart of the city centre within Colmore Row, Priory Queensway, Moor Street Queensway, Park Street, Upper Dean Street, Smallbrook Queensway, Suffolk Street Queensway and Paradise Circus.
The order runs from Friday 27 May to Thursday 27 October 2011 when the order will be reviewed.

Shame the thugs have decided they can ignore these weasel words.

Shame a Council can get someone arrested merely for reporting on what they do.

Whatever happened to one law for all? Or was that just a dream?

4 comments for “Compare and Contrast”