I repeat below an Ironies Too post, from 2009, as its message is even more apt today! I followed this posting up, just over a week later, on the 800th anniversary of the Cambridge University, with another posting which concluded with this sentence, “If we are to come through the present economic collapse where a fresh start is so urgently needed we must all speak out against the disastrously mistaken route of enormous borrowing now being undertaken by Brown and Darling!,” of course, even with a new government, no such change has been made, after all we are still in the hands of the same “Whipped Two Party Tyranny” of the Oxbridge wreckers conspiracy, albeit with the ‘all things to all men’, EU dependent, LibDems on board. 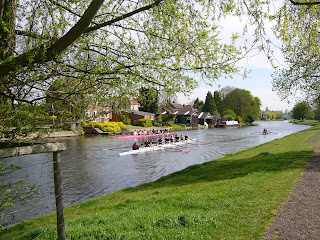 The next generation of Britain’s ruling elite learn to pull together on the River Cam.
Of course around the bend in both directions lie weirs and locks, so they are going nowhere!
As long as they all pull together and stay in unison they are taught nothing else matters. After all only the cox can see what is ahead.
Watch them at the locks when they try to change direction and the ridiculousness of their endeavours quickly becomes apparent.
With Britain clearly on the rocks, surely NOW a few will speak out at the nation’s disgusting mis-governance!

Just over a week later, I made the following additional observations:

The 800th anniversary of Cambridge University this weekend is a good opportunity to return to the damaging obsession with the rowing analogy instilled by our senior universities and spreading across all levels of British society.

Interestingly Matthew Parris comments on the effect of this problem in his column in The Times this morning.
I blogged on this topic earlier this month,  with a very pretty picture of an idyllic rowing scene on the River Cam. The reality of the ingrained fear to stand out from the establishment consensus or state one’s individual views when one can see a disastrously wrong course being steered is the penalty NOW being paid by Britain for decades of this false philosophy.

As Matthew Parris so accurately puts it:

For courage rarely surfaces until retirement. Just how brave is our British habit of staying tight-lipped about unfolding policy calamities while still part of the policymaking team – and then, after a decent pause and a garnish of ermine, swinging about in the Upper Chamber with a “my Lords” here and a “my noble and learned friend” there, to pronounce on all the mistakes you apparently saw coming for years? How proud should a man or woman be of that?

There will always be disingenuous hindsight; but all too often the retired luminary is being honest when he says that he knew at the time a doomed policy was doomed……

It sometimes seems that we all trudge down a long road we suspect is leading nowhere, nursing our private doubts and keeping our mouths tight shut.

This is exactly the problem. I feel sure we have all been guilty at one time or another of falling into the trap spelled out in the paragraph immediately above.
If we are to come through the present economic collapse where a fresh start is so urgently needed we must all speak out against the disastrously mistaken route of enormous borrowing now being undertaken by Brown and Darling!

How many extra billions of pounds do Britain’s taxpayers now owe as a result of this deliberate incompetence surely verging on criminal negligence?

4 comments for “Pulling together towards disaster”