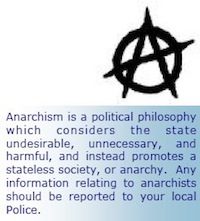 Via the Adam Smith Institute, the latest target of the British police:

I’m not quite an anarchist – although some of my best friends are, and the works of people like David Friedman (PDF) and Georgetown legal philosopher John Hasnas (PDF) make me unsure. But saying that “anarchists should be reported to your local Police” is a pretty extraordinary command that should worry everybody. Disliking the state is now enough for your neighbours to report on you, and for plod to take notice.

Per the comments over at the ASI they probably are just referring to those who are mostly pretend anarchists, who are really just socialists, Marxists and other collectivists with perhaps the odd Bakunin type here and there, and who attempt advance liberty by smashing up other people’s property. Even so, they’ve defined anarchist well, and it’s the definition that would cover anarcho-capitalists as well as anarcho-collectivists, and possibly minarchist libertarians as well. Alarmist? Possibly, but does anyone really think inconceivable that a conversation along these lines might occur?

“Well, you see, officer, that Exile bloke I told you about keeps saying how the State is nothing but bad news and even the handful of bits worth keeping are more a necessary evil than anything else. Yes, I do know where you can find him on a Tuesday afternoon.”

This is thought-crime, no more and no less, and the worst part of it is it isn’t a first. It’s just the latest opinion that might just get you watched and spied upon, investigated, arrested, charged and even convicted. Welcome to modern Britain, the world’s first nation sized Orwell Theme Park.

← Rock-a-bye baby, on the tree top…
Those Pesky Anarchists →

12 comments for “You! Yes, you with the Murray Rothbard badge. You’re under arrest.”