RBS boss Stephen Hester spoke to the BBC’s Evan Davis this morning on the Today programme:

I think that we are seeing today what arguably we should have seen better in commentary in 2008, and that is it’s not a banking crisis, and it never was, although banks were involved in the crisis, it was one of global economic imbalances in the way that we all collectively deal with our economies.

And in that way we are seeing it more clearly that the root of what is going and the nervousness of what is going on is really about how we manage our economies globally and individual, and the confidence measures that go along with it. 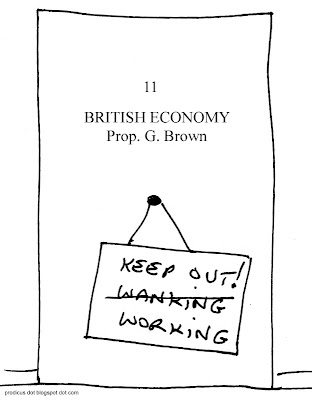 Yeah, we know. Have our masters twigged, yet, that we knew it in 2008 and we know it now? Do Stephanie Flanders and her lying leftie Struthio camelus ignoramus mates at the BBC know that we know they are lying when they blame the bankers and instruct us to do the same?

I refer ‘honourable’ ladies and gentlemen to my earlier remarks.

At the risk of appearing petty and selfish, may I just add for the benefit of Commissars Barroso, Rehn and chers collègues that that’s my life-savings and my pension you are pissing up your hard-left fantasy euro-wall in your contest to see who has is the biggest penis in world politics. Ah me, so many contenders…

‘Hard left?’ Oh, yeah. Seriously… do some reading up on Barroso, Strauss-Kahn and Cohn-Bendit. They have never given a damn about you (‘tsk, omelette/eggs… building the European Union’), your money (‘nope – property is theft’) or your liberty (‘wrong again – false consciousness’). They care only for their system, their idealogy and the privileges of the nomenklatura, Them. (e.g., cf. Kinnock family pensions/Clegg pensions/Mandelson pensions.)  You did not elect them. You cannot fire them. They have all the power and you have none. That’s how and why They designed the system which the British government supports to be wholly undemocratic and therefore (now, you are not allowed to laugh at this) efficient. But back to the plot.

What? You know all about my financial plight, Mr Maoist Barroso? And Le Projet outweighs all such petty considerations?

I’m off to scribble something about whoredom on the walls of the local EU outpost. Something about power-without-responsibility. It’ll come to me. Then it’s off join the lengthening queue at one of the many rope-and-piano-wire emporia springing up all over the continent. (Unusual economic growth, I grant you, but growth nevertheless.) And later today I shall move what’s left of my savings into Chinese hempen, rebels for the use of.