There is a lesson from the financial markets that France can now no longer ignore, as the graph on this link to Bloomberg makes startlingly clear. The spread between the interest rates between French and German 10 year bonds rose to almost 90 bps during the past week. On 16th September last year, this spread stood at only 38 bps. The steady progression mirrors what has successively occurred to Greek, Irish, Portuguese, Spanish and Italian Bonds spreads against Germany.  The same fate now awaits France! Such a lesson can no longer be ignored by the politicians of France’s leading party who face re-election next year. More background and data may be found here and here.

Illustrating this point was an interview by the BBC Today Programme with Jacques Myard  this morning which can be heard at 3 minutes 50 seconds into the audio available from this link. Mr Myard is a deputy of the National Assembly in France for President Sarkozy’s ruling UMP party. Earlier in the same audio recording you can hear German disgust, among other doubtful comments, over the frequently shifting EU position as exemplified by the letter from EU Commission President Barosso, of whom there appears to be an apt picture of an earlier vacation from the Daily Mail, linked here, and reproduced below: 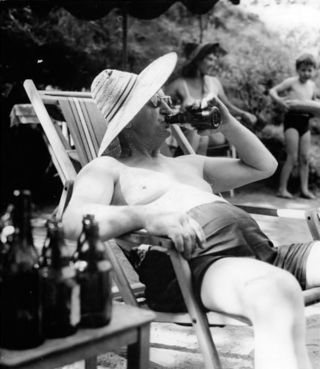 Britain’s leaders should be alert enough to the dangers now upon us, to remove themselves from the excesses of holidaymaking stupor, so vividly represented in the image above, and return to prepare the nation for what is to come, as urged by Ironies Too for the past two mornings.

Vince Cable, who appeared on the BBC TV Saturday morning news show, badly needs extra support, at the highest possible level, from both his party and the Conservative Party! Or should I say the Prime Minister and the Deputy Prime Minister, as they are laughingly titled! (First posted on Ironies Too 10:15 am BST 6th August)

4 comments for “The French linchpin to the euro begins to falter & Barosso’s hols!”