A few months ago I had a short comment conversation with Lex Feranda, The Thinking Policeman, about the British police and industrial action.

Angry Exile said…
How far are you barred from taking industrial action? I mean we all know you’re not allowed to strike (and I’d agree that having no right to withdraw your labour is unreasonable and immoral, although you did all sign up to it when you joined). But surely you can take other forms of action. For example, can you refuse to work overtime? I can’t see how anything can prevent a work to rule, although it sounds like you lot are tied down by so many rules already that people might not notice…
[…]

Lex Ferenda said…
The police in this country are legally barred from taking ANY industrial action and to encourage or incite another to do so is a criminal offence, so you cannot even suggest it.

You don’t often get me expressing sympathy for the police, but that simply sucks balls. Yes, I know they signed up for it but Christ, if any other employer in any other line of work imposed conditions that allowed them to discipline people for wanting to have their days off or actually go home at the end of the shift instead of working overtime… well, I was going to say there’d be demands to have laws made against it, but of course there already are. Not for the poor rozzers though.

As a libertarian I feel that everyone should be free to withhold their labour in a dispute, which is basically all the ‘right to strike’ is.* So of course I think this restriction on British police is immoral and, because I bet some of the compulsory overtime is unpaid, is distinguished from slavery mainly by the fact they do get a base salary and they are allowed to quit (admittedly quite a big distinction, but you get the picture). Whether the ban on any kind of industrial action is, as a practical matter, a good thing for the rest of the public has always had me sitting on the fence. When the thin blue line is all that protects citizens then not letting them take industrial action is understandable, but as I hinted at in the last post I’m far from convinced the thin blue line is far too thin when the chips are down anyway. On top of that in recent years politicians have had that thin blue line turn on citizens in one way and another, criminalising people for technical offences and victimless crimes. And of course one that gets up the noses of Mr and Mrs Middle England on a fairly regular basis is being done for motoring offences, especially speeding, because it’s pretty obvious that there’s a vast gulf between being a few km/h over the limit and driving like a weapons grade knob. But the pollies like clear up rates and the police can get easy results with speed traps. Just as an example, does anyone want to bet that when the dust settles in the areas of those UK forces that have had riots there will have been more looters arrested than speeding tickets issued for the same period? Or do we think the automated cameras and civilian operated camera vans will have pinged far more for speeding, virtually none of whom will have crashed as a result, than the police will eventually charge with walking down the road with a looted flatscreen TV.

So keep that in mind when I show you what can happen where police can take industrial action.

VICTORIA’S water police have plonked a boat between oncoming traffic and a speed camera operator as officers upped the ante in a pay dispute.
The police and the state government are locked in a stalemate over the police union’s claim for a 4.5 per cent increase. The government is offering 2.5 per cent.
Leading Senior Constable Matthew Blythe, of Williamstown police, said the water police parked their boat in front of a speed camera to do checks, the first ones conducted inland at a busy intersection. 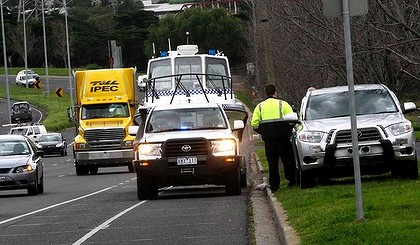 ”Currently, we’ve got protected actions in place, and one of those actions is to pull up and do a welfare check.”
This, he said, would let the public know that there was a speed camera there.
”Now, the speed cameras are designed to reduce traffic speed, so us being there still has that effect.
”Potentially, if the motoring public see a police vehicle – this time it will be a police boat with its lights on and a police vehicle towing it – logically, if you see any emergency vehicle with its lights activated, it would slow you down.
”So, in theory, people will slow down and not get booked.”
Water police may repeat the procedure in Werribee and Geelong.

“Leading Senior Constable” – how about these police ranks here in Oz, eh? But as for the point about parking a patrol boat in front of the speed cameras, it makes me think there’s something to be said for letting the cops take industrial action after all, especially as for many cops everywhere it’s very much a vocational line of work and I’m sure they’d still show for real emergencies.

* Of course the freedom to withhold one’s labour does not necessarily mean an automatic right to keep the job.

← If Not For The Jail Sentence, He’d Have Been Rioting Too…
Direct Democracy →