You have to wonder just what someone from the not white majority part of the UK would have to do to be accused of a hate crime for racist behaviour. You’d think a 4 on 1 attack with the perpetrators screaming kill the white slag and calling the victim a white bitch, pulling a chunk of the victims hair out and leaving them so traumatised they have had to give up work due to flashbacks.

A gang of Muslim girls who repeatedly kicked a young woman in the head walked free from court after a judge heard they were ‘not used to being drunk’ because of their religion.
The group screamed ‘kill the white slag’ while kicks raining in on 22-year-old Rhea Page as she lay motionless on the ground, the court heard.
The attackers – three sisters and their cousin – were told by a judge that normally they would have been sent to jail.
However, he handed the girls – all Somalian Muslims – suspended sentences after hearing that they were not used to alcohol because their religion does not allow it.
Their victim was left with a bald patch after they pulled a chunk out of her hair during the attack on the High Street, Leicester.
Ambaro and Hibo Maxamed, both 24, their sister Ayan, 28, and cousin Ifrah Nur, 28, attacked Rhea, a care worker, as she walked to a taxi rank with her boyfriend after a night out.
The victim, a support worker, was left so traumatised that she lost her job following repeated absences with stress and flashbacks, Leciester Crown Court was told.
The charge – assault occasioning actual bodily harm – carries a maximum sentence of five years in prison.
James Bide-Thomas, prosecuting, said Ambaro Maxamed, who started the violence, had called Miss Page a ‘white bitch’ during the incident.
The women, who are all Somalian Muslims, were not charged with racial aggravation.

Can anyone see any reason why this wasn’t a racial attack? Can anyone imagine had the roles been reversed that a group of white women doing the same thing wouldn’t have been up on racial aggravation charges as well?

The whole point of justice is that it is supposed to be the same for everyone, that’s why the statue representing justice is blindfolded, yet it’s becoming increasingly obvious that there is a two tier (at least) system in operation and it seems to be based on the colour of your skin/religious persuasion. Anther recent example being here, which looks suspiciously like a race hate crime but will not be investigated as one as the victim is white and we all know that only white people can be racist.

This sort of story and the quite evident differing approaches to depending on the victim will breed more and more resentment in society many of whom in the majority already feel that they are victimised simply for being who they are and that those whose skin colour is different get preferential treatment when dealing with authority. After all, take the case of Emma West, who pleaded not guilty yet  is still in jail on remand for further reports till the new year and her kids in the care of social services for having rant on a tram.Yet what these young women did is far far worse than that and you guessed it, after their arrest were released back into the community on bail.

Something is seriously out of kilter in our society and if it is not put right the resentment will continue to grow until it explodes into violence. You often have politicians and pundits warning against the rise of nationalist groups, todays headline in the Daily Mail is a perfect example of why it’s happening. 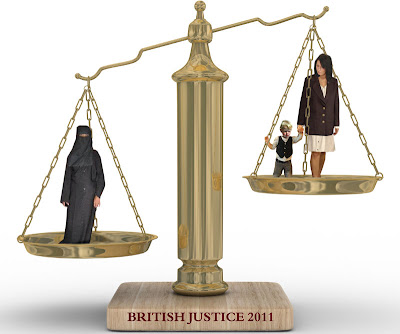 Following the disgusting behaviour of the judge in the  attack against the white girl in Leicester by four Somalian girls.

The EDL will be holding a national demo on the 21st of January 2012.

← Is this the England we want?
Merkozy’s New Treaty is but the Growth & Stability Pact 2.0 →