Do you remember the end of 2010? I do. My very last blog post of the year was titled “Last effort for the Offence Seeking Twat of the Year Award” and was about the Top Gear Christmas special outraging literally some people, most of whom were white, middle class Graun readers. Oh, and Andy Choudary.

Needless to say I haven’t actually seen Top Gear’s “Three Wise Men”, and being a Christmas special I expect it’ll air here between Easter and late June, but it has already made some news here. And it’s all thanks to James May, a rock, a few square yards of black cloth, and bloody Anjem “Is-It-‘Coz-I-Is-Slamic” Choudary. It seems that James May brained himself with a rock somehow and that when he came out of hospital, for reasons I don’t pretend to understand, this was what he was faced with.

Jeremy Clarkson and Richard Hammond disguised themselves as women by wearing Islamic face veils which only revealed their eyes in a Christmas show filmed in Syria.

Andy, with almost gravitic inevitability, was upset because he saw this as an attack on a symbol of his religion, which as far as I could tell the burqa isn’t, having been predictably silent over the years about Muslim attacks on the symbols and traditions of other religions.

Still, all to be expected, and so is the nature and level of outrage directed Top Gear’s way over this year’s Christmas special.

Jeremy Clarkson has been accused of offensive behaviour once again after mocking Indian culture in a Top Gear Christmas special.

Okay, can I interrupt to make a brief point. There’s no ‘accused of offensive behaviour’ about it – if someone was offended then ipso facto his behaviour was offensive. The question is whether that’s a reason for doing anything, and since nobody’s ever done so much as two fifths of fuck all about most of the things that offend me, and since that doesn’t keep me awake at night, I’d say the answer is no, no reason to do anything at all. Being offended is painless and causes no loss unless someone chooses to allow it, which says more about them than what they’re complaining about. By all means take offence and say so if you like, but don’t tell me it harmed you and the other person must be silenced.

Viewers have complained to the BBC after the outspoken presenter made a series of controversial remarks about the country’s clothing, trains, food and history.
At one point, Clarkson appeared to make light of the lack of sanitation for poor residents by driving around slums in a Jaguar fitted with a toilet.

And? It’s not the wittiest way of making the point but unless it’s actually wrong and Indian slums typically have indoor plumbing, piped water supplies and sewers now I don’t see the problem. These people are dreadfully poor and literally don’t have a pot to piss in. I’m not saying that Clarkson was subtly highlighting the issue of Indian poverty but it’s not as if he was saying something that isn’t true. Even if he was the appropriate response is rebuttal, not howls of righteous outrage and the usual demand to have him sacked and flogged with broken glass.

And then we have the actual volume of complaints.

A spokesman for the BBC said they had received 23 complaints about the programme, which was broadcast on Wednesday evening.

And how many watched? According to the Graun, who I imagine would like nothing better than the anger of the terminally thin skinned over Clarkson’s shoot public sector strikers remark to kill TG’s viewing figures, five million people watched and it was the most popular show in its time slot. Assuming every one of those 23 who complained actually watched the show that’s 0.00046% of viewers who were offended, and given that about a million people in the UK are of Indian ethnicity it says even more that only 23 complained. Not that all those 23 were necessarily Indian – some are probably white, middle class Graun readers getting offended on behalf of Indians, who presumably don’t know when they’re being offended. Certainly some of the people taking to message boards and Twatter seem to be.

Owen Hathway tweeted: “Whats wrong with the BBC that they think casual racist stereotyping is acceptable on top gear?”

No idea, Owen, but why don’t we leave it up to the million British indians and the billion Indian Indians to decide whether to be upset. Many of them might think it’s some middle aged white guy making a tit of himself and find it amusing. But no, they’re clearly mistaken and should be as outraged as the Owens are on their behalf, because it’s raaaaaaaacist, see? Raaaaaaaacist!

Which reminds me, where do I write in to complain about this sketch by Goodness Gracious Me from a few years back? I thought it was pretty funny at the time, but now thanks to 23 anonymous complainants and an assortment of condescending pricks I now realise that it was mocking English culture and… what was it again? Oh, yes, I remember: casual racist stereotyping.

I mean, what is wrong with the BBC that they thought it was acceptable?
[youtube]http://www.youtube.com/watch?v=cnNeAgPmxis[/youtube]

What’s good for the goose is for the gander, offence seekers, and you can’t have it both ways. Either both are bad and offensive and shouldn’t be allowed, or both are fair play regardless of whether someone somewhere is (or just decides they ought to be) offended by it. I’d say the latter because, as I’ve said before, there is no right to go through life and never be offended, and since one person can be offended by something that is said while another can be offended by it not being said there never can be a right to not be offended.

As someone who’s offended by opening the paper and has moved somewhere that has its own special name for the English my advice would be to get offended all you like as often as you like by absolutely whatever you, er, dislike. Just don’t sit there fuming and expecting it means you have a right to insist that anyone else has to accommodate your feelings, because a free society can never work that way and all an unfree society can do is to pick sides. 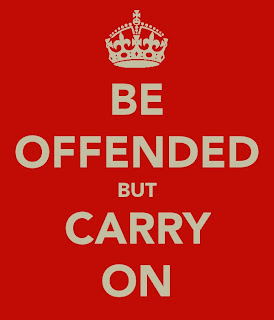