Here’s a chart showing the break even point for an industry where the fixed costs of setting up in business are £100 a year and the marginal extra cost per unit manufactured and sold is £1. The selling price for these items happens to be £5.

The government of Country B (which is run by the landowners and banks) says “Sorry lads, but we need to raise taxes from you, so we are going to slap you with a corporation tax of 46%”. So the marginal businesses, who have only just managed to break into the market, or who are in danger of going out of business, pay nothing, and the large established businesses with an output of 70 units are paying £1.18 tax per unit sold. The good news is that the break even point is largely unchanged at 25, so the economy still benefits from free competition and output is not unduly stifled: 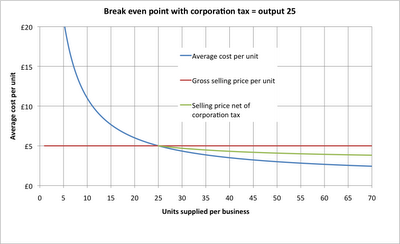 The area between the green line and the red line indicates how much corporation tax would be raised.

The large established businesses in Country C see which way the wind is blowing. Taking a lesson from their land owning and banking chums, they lobby hard against corporation tax but admit through gritted teeth that they’d accept the imposition of a turnover tax instead (called Value Added Tax in the UK*). So the turnover tax is imposed at 50p, but this pushes a few marginal producers out of business (those with output less than 30 units), so the turnover tax is increased a bit more and a bit more, and in long run tax works out at £1 per unit sold so that the total tax raised (the area between the red and green
lines) is the same as in Country B (to make it a fair comparison):

As you can see, having a turnover tax rather than a profits tax has two big advantages for the large established producers in Country C:

1. They actually pay less tax per unit (£1) then they would in Country B (where the tax per unit would be £1.18). And businesses with an output of 55 or less are paying more tax per unit, in the case of the smaller businesses, considerably more.

2. They are nicely insulated from competition, because it is much more difficult getting your annual sales up to 34 units than it is getting them up to 25 units; all those producers with output of 34 or less will struggle badly and go out of business; all those businesses with output of less than 55 will be paying more tax. So with a bit of luck the volume of business the big businesses gets increases; or it might be that GDP falls and unemployment increases. But that is not the problem of the Chairman of a big business, is it?

* Surprisingly, a lot of people in the UK believe the myth put about by politicians that VAT somehow magically doesn’t affect economic activity that consumers blithely pay it without spending less money on other things. I usually get a comment to that effect every time I do a post on VAT. Just goes to show whom people really believe, when all economic logic and actually looking at hard evidence says that VAT is borne at least two-thirds by the producer.

10 comments for “Why Big Business quite likes VAT”