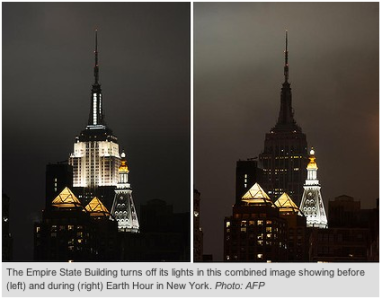 Usually around this time of year I’ll write something about what a pointless, time wasting, meaningless circle jerk Dirt Hour is, and how, while I won’t be turning on every light and then going out to drive round the neighbourhood for an hour to belch some extra carbon, I plan to mark it by not changing what I’m doing in any way at all. I’ll note how pointless Dirt Hour is as a meaningful reduction of emissions, yet how unnecessary it is for ‘raising awareness’ since it was invented after people had been droning on about warble gloaming for three decades and so everyone in the industrialised world has bloody heard by now. I’ll mention that I think Dirt Hour is really no more than a quasi-religious ritual, the eco-wibbly version of one of those once a year festivals that are typical of all the religions that actually admit they’re religions and something to keep those of the faithful who talk the talk at dinner parties but don’t walk the walk (possibly because they’re driving the Mercedes instead, which is justified because they have a Prius as well now, you know) from going over the side and altogether abandoning belief in salvation from the evil carbon fairy through windmill and solar panel worship.

And I’ll talk about how an hour of banging shins against furniture, or for some going out for a candlelit carbon emitting meal or using up some petrol driving to somewhere with a nice view of the lights going out (actually just some of the lights judging by that photo), on an evening that’s likely to be mild in many countries is an inadequate introduction to the changes the world really needs to make if man made warble gloaming theory is true, and how Earth Month in January or February when a lot of people will have the heating turned up while many of us in the southern hemisphere will be wanting our air conditioning on (not this year – the summer was too cool) would at least be practising what’s preached and enable me to at least believe that those wanting me to believe in warble gloaming too take it seriously themselves. I mean, come on. The Muslims fast during the day for a month during Ramadan, the Christians find something to go without 24/7 for about six weeks during Lent, and the eco-crowd expect me to take their version of the Apocraplypse seriously when all they can manage is to turn the lights off for a fucking hour? Give me a break. Taking part in Dirt Hour is like pissing yourself in dark trousers – you’ll experience a warm feeling but the world won’t notice.

So that’s what I normally have to say in the run up to Dirt Hour. But not this year, because despite looking out for this kind of thing so I can get all cross and ranty and blog it, this year I didn’t even notice it was on until this afternoon, some 15 hours or so after it was over. And where did I see it? 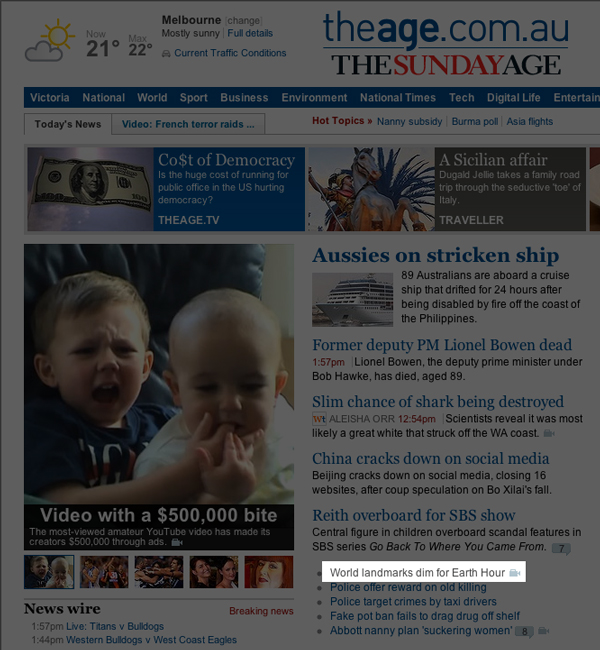 I don’t doubt that The Age, an organ of Fairfax Media, one of the co-founders of Dirt Hour, made mention of it more than once recently but if I missed it until now and if they rate this supposedly vital exercise as, judging by the other contents of the page, less important than a You Tube video, a couple of footy games, some ugly politicians’ kids being quite good looking, eating chocolate and kangaroo, some Australians on a disabled cruise ship, the death of an elderly and retired politician, the difficulties involved in catching killer sharks, China outdoing Australia on restrictive internet policies, and someone who said something wrong about asylum seekers more than ten years being on a forthcoming TV programme about asylum seekers, then I can only conclude that in many people’s heart of hearts they don’t think it’s a real biggie either. Some of those things are interesting and some of them may even be seen as important, but are all of them more important than Dirt Hour? Really?*

If by a man’s deeds, or by an eco-friendly newspaper’s website, you shall know him/it then perhaps this shows where the priorities of warble gloaming believers really lie: the ordinary trials and tribulations of daily life, just like everyone else.

7 comments for “So much for Earth Hour”