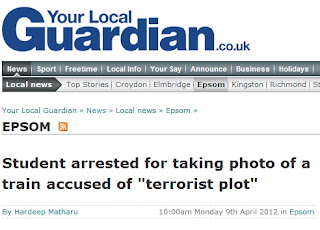 Hmmm, right, another one of these cases. Well, let’s hear from the student and the police and…

Chris Ward said he was at Tattenham Corner station last week when he heard about the alleged arrest.

A third party is reporting this? And where did ‘alleged’ come from? It certainly isn’t in the headline!

“I was queuing at Tattenham Corner railway station this morning for a ticket.”A very nice lady was complaining to the ticket man. Her A Level student daughter, at a local school, was arrested for taking a photo of a train leaving Tattenham Corner station.

“The daughter had explained that she was doing a piece of work for school on local travel facilities.

“The girl’s camera was confiscated and the pictures of the train deleted. Apparently this was all done because ‘she could have been part of a terrorist cell plotting some form of attack on the train’.

“I find this just incredible.”

Me too. But not for the reasons you might think.

A Spokesperson for the British Transport Police was unable to comment on the incident without the date on which it occurred, but confirmed it would not be illegal to take photographs for a school project under general law.

It would, however, be illegal to confiscate camera equipment. And if this had indeed happened, then the ‘very nice woman’ wouldn’t have remonstrated with the ticket seller, surely? She’d have gone to the police, probably with lawyer in tow!

But back to Chris Ward:

He said: “This very brief story shows just how stupid we have become in this country.”

Well, actually, I think that until we hear the story first-hand and get official confirmation of it, it merely shows just how low the profession of local journalist has sunk…

Have you been stopped taking photographs at a railway station or know anyone who has? Email hmatharu@london.newsquest.co.uk