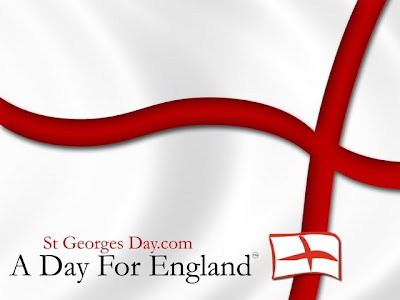 Happy St George’s Day, one and all.

Here we are again – another year gone and are we any closer to an English parliament and an English nation? Why would being English be seen as racist by anyone in the country? Why would this day not be a holiday? There are many questions.

No doubt you’ve glanced at the Sceptred Isle’s report which doesn’t get us all that much for’arder. Britology Watch, which wonders why the word England is not used by more people, wrote, in January:

London and the UK as a whole do indeed seem to have taken on the character of an “offshore centre taking capital away from the rest of Europe”, as President Sarkozy is reported to have said to David Cameron at the summit meeting of 8/9 December. But have London and the UK also lost their moorings in any sort of grounded reality that one might know as ‘England’, let alone in the financial and political reality of a looming euro and EU meltdown?

The nationalist movement was more widespread six years ago, with Witanagemot and so many English blogs but what has happened? Even Toque has shut up shop and nothing yet from QM or Autonomous Mind. Does anyone remember the posts about the EU regions and the way England is/was to be split into regions but the other home countries retained their identities? Does no one care any more?

The Englishman has a piece up about Kipling’s take on being English and as I find more during the day, I’ll add them to this post but what I’m seeing, looking around the blogs, is a weariness, a demoralization, an almost WTF?

So, if we don’t wish to be English, perhaps those on the coast might go along with the EU proposal to create La Manche:

That way, if anyone asks where you’re from you can say you’re a Man of la Manche. I’m sure the Brussels bureaucrats have all sorts of other lovely proposals such as this, converted into “recommendations” which metamorphose into “directives”.

I wish you all a happy St George’s Day, England’s Day, not forgetting happy birthday to Will.

UPDATES during the day:

1,  Moggsy, from across the pond, asks [at my place] and they’re not bad questions:

# How much extra would an English Parliament cost? Would you really want another layer of of wannabe politicians busy making even more pointless laws? My reply, Moggsy, would be from CEP:

Surely an English Parliament will create an extra layer of bureaucracy and cost?

No! There is no need for the expense of an additional parliament building and with the transfer of English domestic issues to an English Parliament the Westminster Parliament would deal only with reserved matters. These could be dealt with by a much smaller number of UK MPs and would release a large number of MPs from Westminster to allow for a separately elected English Parliament at no extra cost. Moreover with well over 700 members of the House of Lords, reform to an upper house could lead to savings of at least £168 million. Objections on cost would engender more respect if British politicians intended to release the 297 extra politicians that the English electorate have been, without their consent or consultation, supporting since 1998. Moreover, these costs were clearly not considered very important when granting devolution to the rest of the UK.

# Would an English (regional) Parliament be starting down that road the EU wants?

England is not a region – it is a nation. The nine regions are the EU idea. England, despite CEP’s idea of staying within the EU, would actually hasten the demise of that monstrosity and thus nowhere in public life is England allowed to be mooted as an independent concept. This is why the EDL is vilified beyond logic and reason – not for violence on the streets but for the threat England represents for the EU and other world bodies, e.g. the UN.

One interesting question is how the City sees England, given that is the international centre of finance, not just the British.

3.  Man in a Shed not exactly writing of St George’s Day but he mentions England and fracking.

4.  I’ve just been to every blog on my reader and no one else has mentioned England as yet.

England is too important to be erased from the pages of modern history. The English are too valuable a people to allow this to happen. When I write of England, it may well be through rose-coloured glasses, but to me all of the above is England, it is my England, it is your England, and once again, history beckons us to defend it.

6. Max belatedly put one up.

← Trying to deconstruct that which people are inured against recognizing
Hanging, flogging… and caning? →

10 comments for “A Day for England”