…it’s a never-ending battle between them and the forces of the Vast Right Wing Conspiracy™ .

Now, on Saturday, I was idly browsing Twitter, when Ally Fogg (a CiF columnist, but a reasonably sensible one, mostly) tweeted a worrying report from Brighton’s Pride march that kettling was going on.

Hmmm, what was going on? Why would the cops – who were desperate to facilitate the march to prove their ‘friendly to LGBT issues’ – be doing this?

I mean, OK, the Tweeter does self-describe as “Radical intersectional vegan anarcha-feminist riot grrl seeks similar for online circle-jerk and possible class war.” but the cops on the ground don’t know this idiot from Adam, and there’s only a handful of ’em!

But the drama mounted steadily:

Oh, the humanity! Was it because of the threat that these crusties were likely to kick off? After all, the police had just a few days ago intercepted a large consignment of party favours?

But no. Turns out the cops were as baffled by this turn of events as everyone else: 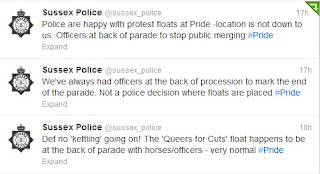 She couldn’t even sell this tale of woe and inhumanity to such a left-leaning organ as the Beeb!

Mind you, a Tweet a little while later showed the mindset of this fearless warrior for social justice:

Awww, no! Poor doggie! People following this drama queen asked – not unreasonably – if she had reported this to the authorities. Which drew this amusing response:

People, I think I’ve found the new Laurie Penny! Or, at least, the Lidl version…

9 comments for “Life With The ‘Reality Based Community’…”