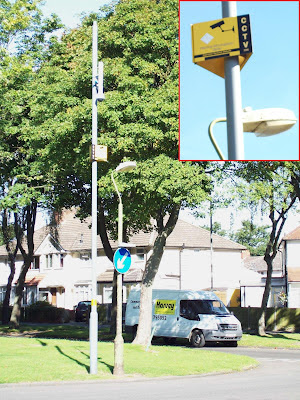 “In general you could not assume that you were much safer in the country than in London. There were no telescreens, of course, but there was always the danger of concealed microphones by which your voice might be picked up and recognized…”

Left: suburban Birmingham (UK), 9 September 2012
This camera was installed recently – and quietly – near to where I live.
Like so many things these days, it has its own little slogan: Making Birmingham Safer.
Not true. Last Sunday afternoon, the burglar alarm went off on a house across the road. I called the police, who told me they wouldn’t come out unless I saw something suspicious; it could, after all, explained the policewoman on the other end of the line, have been triggered by a cat jumping onto a windowsill or something.
The response was much as I had expected, but I’d made the call to placate a couple of little girls who’d noticed the noise while trampolining in their garden next door.
When there’s a real burglary, all you get is a crime number so you can claim on your insurance. And maybe a crime prevention pack from Victim Support officers who want to come in and eat your biscuits (I told them what I wanted was the burglars’ heads cut off with a blunt knife, but their reaction suggested that my wish was inappropriate).
On the Monday, I returned from work to find a note through the door. It was from the police, asking for witnesses to an attempted robbery on our street on Sunday evening (c. 10:30).
No connection? Or would B not have happened if Birmingham’s finest troubled themselves to deal in person with A, and show a regular physical presence in our area?
What use are cameras? Until burglars and muggers go around with numbers on their chests there’ll be no flash-flash-you’re-caught, like speeding motorists.
I suppose the police could upgrade to automatic face recognition software – but with all its Big Brother potential, that’s a cure worse than the disease. Besides, criminals would find ways round: Andy McNab’s novels explain how you go into a charity shop, buy a change of gear and put a peaked cap on your head and hey presto, cyber-following is foiled.
So what is all this? False reassurance, or an excuse to tighten the snooper’s noose round the citizenry in general?
Or is it simply easier and safer for the cops to shuffle papers and handle calls from ninny householders who imagine we’re still in an age when collars were felt, naughty kids’ ears clipped and the bobby would tell you the time? Clock on, clock off and roll on retirement?