Police have revealed the chilling array of deadly weapons they seized in just four months – including a crossbow and a traditional samurai sword.

The fearsome arsenal, which even includes a gold-plated axe, was put on display yesterday by West Midlands Police as part of a new anti-weapons campaign.

Other dangerous arms featured in the grim haul are nunchuks, knuckle dusters, a giant flick knife and crude planks of wood with nails hammered into them. 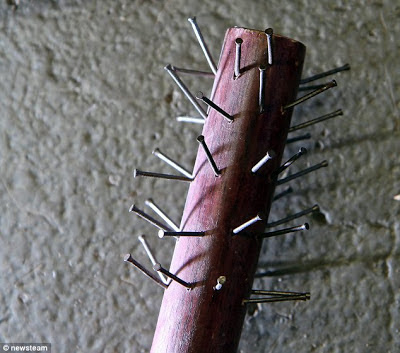 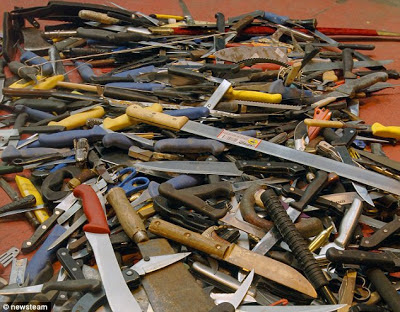 One of the points I was making in my last post on Gun Control was that criminals will not give up crime if guns are banned.

A great deal of the items that the Daily Mail now refers to as, ‘Fearsome’, ‘Chilling’ and ‘Deadly’ are simple household tools. Others are ornamental and some are just home made.

Since the British citizen was disarmed through gun control, criminals have armed themselves with other means, but we are still allowed nothing in the way of defence, not even a pepper spray.

In the middle of the gun control moral panic, the Daily Mail have inadvertently highlighted the futility and injustice of disarming a population.

Ban sticks with nails in them!

*Update* And as Julia’s timely post points out below, the ban on ‘weapons’ is never ending

← Nice Little Shop You Got Here. Be A Shame If Something Was To Happen To It…
Tosser of the year →