You’ve got to admit, it’s not often you see that sort of headline, is it?  What prompted this? Cocaine amongst the campanulas? Heroin concealed amongst the hollyhocks?

Well, no. Amazing as it may seem, it you sell legal equipment and aren’t asking any questions about the use to which your customers might be putting it, the fuzz will come calling:

The operation came after five months of work where officers visited the premises and were able to demonstrate a clear link between the behaviour of the staff and the promotion of cannabis production.

West Midlands Police were so proud of this they Tweeted it (they probably think they need all the good publicity they can get, after all), which prompted a lot of mockery: 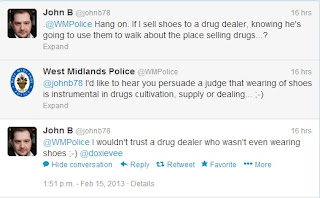 But is it really that funny? Or is it a sad reflection on what the police farce has become in recent years?