Prof Snow said: “The speed limit is 30mph but drivers seem to go a bit faster than that. It would be safer if it was a 20 as it goes right past the school.

“The road is a 60mph limit until just before the school, meaning people don’t always slow down in time.”

They don’t slow down in time from 60mph to 30mph, but they will if you change it to 20mph?

Campaigners also want a footpath built near Chipping Ongar Primary School to stop children having to walk out into busy Greensted Road.

The pavement on the school’s side ends at Jewson, forcing youngsters to cross over several times or brave traffic and walk on the road.

Oh, the hardship! Good job this is Essex and not Nepal, where an unmade pavement would be the least of their problems… 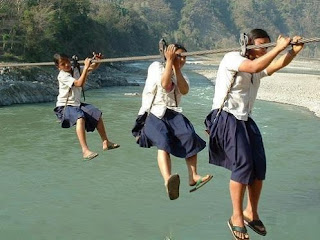 “Have you heard about the situation in Chipping Ongar, Sunita?” “Terrible, Bina, just terrible..”

Claire Bodiam, 40, of Ongar, a member of pressure group Ongar Mums, said: “The Ongar Mums would like to see the pavement outside Jewson improved. Greensted Road is busy and having to cross it twice makes it even more dangerous.

“Many of our children are affected on a daily basis just walking there.”

And it didn’t occur to you you’d have this issue before you enrolled there?

Epping Forest District Councillor Paul Keska said: “We are aware that there is a problem with speeding along the road, this has already been raised at a Highways Panel meeting.

“We are looking at putting flashing 30mph signs onto the road and would definitely support any speed restriction, as any speed limit near schools is a good thing.

“We can’t do anything without Essex County Council but we have raised concerns.”

Oh, you’d be amazed what sorts of eyesores can get listed…

← Let’s bash the teachers
So why did it take so long to get to court? →

10 comments for “What We Need Is A Lower Speed Limit (Because They Don’t Obey The Current Higher One)!”