…if ‘Inspector Gadget’ is a real policeman: 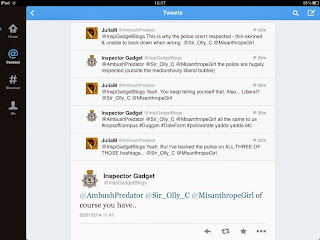 Yes, this is the controversy over Staffordshire Police tweeting the personal details of those arrested on suspicion of drink driving. But under a hashtag that leaves little doubt of their presumed guilt.

It takes some degree of ignorance of the law not to realise the dangers of this (not least, the breaking of Twitter’s terms & conditions) and then – when challenged – to stubbornly insist that all your critics are just police haters and that a fact that can easily be checked is not so…

Mind you, it seems that – on Twitter at least – you never have to go far to find an alleged cop willing to double-down on foot in mouth idiocy: 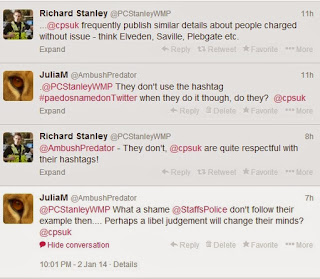 Mind you, challenging them for the title of Idiot of 2014 is their PCC Richard Ellis:

Responding to criticism that his force had committed trial via social media by naming and shaming those charged with alcohol or drug-related motoring offences on Twitter, Mr Ellis said: “No-one will be named where there is any doubt.“

Which part of ‘they aren’t convicted yet‘ did you not understand, Richard? And when is someone going to get a grip on this?

I’m looking at you, Theresa May…

6 comments for “In Which I Wonder Yet Again…”