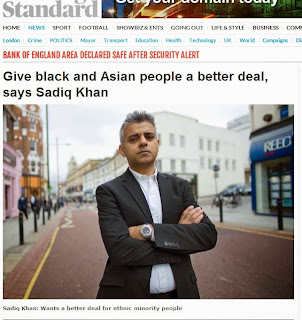 “The fact is Britain remains a hugely unequal country for black and ethnic minority people,” said Mr Khan, the son of an immigrant bus driver, at an event staged in Tower Hamlets by Operation Black Vote.

Police forces including the Met would face a new “legal requirement” to have active recruitment policies designed to increase diversity.

Companies will face legislation unless they increase the number of black people in directors’ posts.

Targets will be set to double to 18 per cent the number of BME candidates in the Fast Stream programme of Civil Service promotions.

Two QCs have been asked to recommend ways to get more BME judges and magistrates.

The Work Programme would be changed to target unemployed black and Asian people more effectively.

We are going down the USA path if we are stupid enough to elect this party. And I fear a lot are…

← Enough dung flung over a long enough time …
What is a true conservative? →

13 comments for “And Do You Fail To See The Irony?”