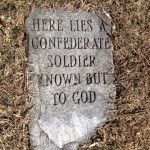 It might be fairly easy to rip up a memorial headstone such as the one pictured and pronounce that one more ‘memory’ has gone down the road towards ‘equality’ but not so easy for others, especially if, like so many other cotton-topped politicians do, they speak and rant before studying the nature of the problem before them. 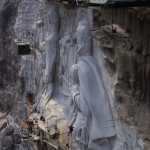 This clown says it should be sand-blasted away, and he wants all the Confederacy to be ‘disappeared’ as well. He might speak on behalf of the NAACP, but he don’t speak for the nation, even from a point of view of plain civil engineering. I mean, it took eight years to flame-cut the massive set-piece into the Stone Mountain rock, and is the NAACP going to fund the removal of this massive piece of Southern History?

I kind of like the low-relief imagery, even on the truly gigantic scale produced on the face of the Stone Mountain; and I also admire the mindset behind the presence of those three leaders of the Confederacy, Jeff Davis, Robert E. Lee and Stonewall Jackson, in that salute to an ideal which, although doomed to defeat, never faltered, never wavered, and, ultimately, helped forge the Union we know today.

← It’s Called ‘Competition’, Charities, Get Used To It…
The food scams revisited →

9 comments for “Look away; Dixie-Land!”