There was no “slide” to war, no war caused by “inadvertence,” but instead a world war caused by a fearful set of elite statesmen and rulers making deliberate choices. [Book review in The American Historical Review of Richard F. Hamilton and Holger H. Herwig, The Origins of World War I (2003)]

Remember us
We are the fallen, dying for a future for our nation
For our children
Remember us
Though the new order urges you to forget, remember
For pity’s sake
So that we did not die in vain

Studying that era does lead one to conclude that the “Great” War was entirely unnecessary, especially given all the treaties which set it in motion.  Plus the railway timetables. On studying the PTB themselves, it’s also clear that this event was scheduled way ahead of time, Buchan intimated as much, by the same types scheduling the upcoming one now. 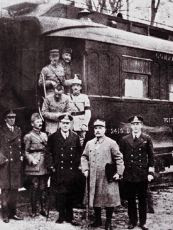 This photograph was taken in the forest of Compiègne after reaching an agreement for the armistice that ended World War I. This railcar was given to Ferdinand Foch for military use by the manufacturer, Compagnie Internationale des Wagons-Lits. Foch is second from the right.

From a long lost article I once had:

One can imagine that meeting in the forest of Compiègne after all the trench warfare, the slaughter and massive dislocation imposed on a bewildered and yet highly patriotic people – after it had finally stopped.

It was 4.30 in the morning of Monday, November 11th in France and perhaps they’d travelled from Paris via Foch’s special train, rugged up for the occasion.

The German delegation crossed the front line in five cars and was escorted for ten hours across the devastated warzone of Northern France (perhaps, they speculated, to focus their minds on the lack of sympathy they could expect). They were then entrained and taken to the secret destination, Foch’s railway siding in the forest of Compiègne.

Telegrams were passed to and from the German team:

… to both the German Army Chief of Staff Paul von Hindenburg in Spa and the hastily assembled civilian government of Friedrich Ebert in Berlin.

Erzberger apparently attempted to take negotiations to the limit of the 72 hours Foch had offered Hindenburg, but an open telegram from Berlin imploring him to sign immediately somewhat undermined his team’s credibility.

Ebert was desperate, facing imminent insurrection in many large German cities. Signatures were made between 5:12 AM and 5:20 AM, Paris time.

How it affected some people

It was hard to believe the war was over. Everything was just the same, tired troops everywhere and cold drizzly winter weather- just the same as if the war were still on.

On that November 11, 1918, morning, another flier, Capitaine Jacques Leps, commander of the French 18th Squadron, sat in his Spad. He was about to take off with his fliers and their planes, all marked with the insignia of a leaping hare chased by a greyhound. The engines were turning over, the props spinning silver.

It was time to get into the air, to escort a major bombing raid on Metz. As Leps raised his arm to signal the take-off, someone came running from the airdrome’s communication room, running agitatedly, arms waving.

Jaques Leps took in the heart-bursting news. He switched off the Spad’s engine. The engines of the rest of his fliers went silent, one by one, as the cry “C’est finie, la guerre!” spread throughout the field. Capitaine Leps unfastened his safety belt and slowly got out of his cockpit.

Let the last word come from Wiggia, one of our contributors, this written in 2012:

A nation which forgets its history, lets it be rewritten by people with no stake in it, allows them to do dirt on it, is a nation on the road to disintegration.

As the eleventh hour of the eleventh day of the eleventh month approaches again and our PM is busy making arrangements for the 100th anniversary of the Great War, just how does the current and not current generation respond to this huge slice of history and the consequences thereof?

I find it very difficult to engage in various state funded “jollies” for lack of a better word – what happened in WW1 and part two that followed was mass slaughter on a scale that is unimaginable, thirty seven million people in the first episode alone, and still it wasn’t enough, with no survivors left now from WW1 and a rapidly dwindling amount left from the second episode.

It becomes ever more remote to the current generation to whom all this was something that happened in another time.

Whether a centenary commemoration will have any lasting impact on those that were not involved or have any links back in family is a mute point, certainly all schoolchildren should have an uncorrected history of the time laid before them warts and all, but how will it be received would they understand that WW11 was largely allowed to happen because the Treaty of Versailles was signed but never properly enforced allowing Hitler to start invading neighboring countries or will the current generation treat it all as some version of a video game?

It’s difficult to tell, time turns what was recent history into a faded memory, however much effort is put in to keep it all fresh.

On a personal basis, I have never been one to dwell on such things or to participate, but I do internally appreciate the sacrifice all those made long ago and I still stand at the given hour, that is the least I should do. My family members were well scattered around the globe in WWII and all thankfully, bar one, came back unscathed.

The one who didn’t, my father’s brother, was blown up when strafing a V2 site in Holland and joined those buried in foreign lands, but it all is a long time ago even the last war.

So when our PM suggests all schoolchildren should visit the sites of the Great War – I never have found out what was “great” about it – who would actually benefit, on paper I would concur that it would be good for people to see the horrors at first hand and man’s inhumanity to man and all the appalling waste of lives that went with modern industrial warfare – it may make a difference, but an ever increasing section of our population doesn’t relate to all this, so I have my doubts.

This year, on my return from France, I had to break the journey on a few occasions and decided to stop at Arras and visit for the first time one of the WW1 sites the one at Vimy.

Although it’s sanitised to a degree with no mud, just grassed over trenches and shell holes, it and a very good visitor centre does it, despite all of this being well documented and retold. It gives you a little more insight into what those poor souls had to endure.

During our time there, there were two coaches containing schoolchildren from the UK which turned up. It was difficult to assess what they made of it but at least they treated the place with the respect it deserves and were being given a description from the accompanying teachers and from little I could hear, was a good fist of what had happened there.

So who knows – there may be hope yet.

And so to today:

How to wear the poppy?

Should you plan to observe the 11 a.m. silence today, wearing a poppy, some maintain there’s a correct way to wear it.  The RBL disagrees although the 11 o’clock leaf is a convention mostly observed since leaves became the thing.  Take this or leave it:

University professor Ms Lowton, 48, was walking last Tuesday when she approached the poppy seller [Peter Godsmark] to ask him if he had a spare pin.

She later wrote online: ‘A lovely military man selling poppies stopped me today and asked if he could reposition mine – while doing so he told me that women should wear their poppy on their right side.

‘He was worried that younger generations wouldn’t understand this and his generation wouldn’t be around for much longer to teach them.’

True or guff, who cares? Poppy police or no poppy police, it’s a nice gesture and a nice story but that old chap in the pic really should learn to wear a beret properly.