Frances Ryan waxes lyrical about the usual suspects having a paddy in London:

“Austerity kills” is printed on placards in block, black lettering, as crowds start to gather on Euston Road in London. It’s been six weeks since I first spoke to Ramona McCartney, one of the organisers behind Saturday’s national demonstration against austerity by the People’s Assembly, and this is the accumulation of what she describes to me as “months and months of planning”.

And what did it achieve, other than some overtime for the cops and some disruption to tourists and workers?

McCartney has heard the National Union of Teacher’s “block” of attendees alone is 10,000 people.

“We really feel the whole of the left are united behind us,” she says.

Shame they didn’t vote for the party they wanted to win in great enough numbers, then, eh?

The “simple message” behind their latest national demonstration is pitched around four key demands: health, homes, jobs and education. Two days before the event McCartney says that, in the light of the Panama tax revelations, they have modified the demands to also include David Cameron’s resignation.

Well, it has about as much chance of being realised as all the other demands, I suppose…

“People were angry already,” McCartney says. “This has given them something to mobilise around.”

Most of them never look all that mobile though… 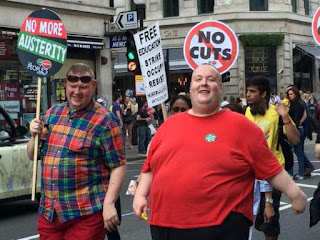 When the People’s Assembly was set up, in February 2013, with an open letter to the Guardian – with signatories including John Pilger, Ken Loach and the then lesser known backbencher Jeremy Corbyn – its stated aim was “to develop a strategy for resistance to mobilise millions of people against the Con Dem government”. The government – and main opposition – may have changed since then, but the need hasn’t.

Indeed it has changed. And not because people marched, but because they voted.

As the crowds gather in Trafalgar Square, cries of “Tories! Shame on you!” boom from the speaker’s stage. I pass a woman in an electric wheelchair. A few feet away is a cardboard sign with a handwritten call: “IDS down: 330 to go.”

In what we’re routinely told is a climate of political apathy, this is tens of thousands of ordinary people challenging austerity. “So many people are disheartened by the political process. We offer something else,” McCartney says. “’Don’t sit around talking about it. Get out and do it.’”

People did. The election proved that. Your march? Not so much…

← As it has always been, always will be
Trump tells voters not to vote for him →

7 comments for “All You Offer Is A Day Out With Rentamob….”