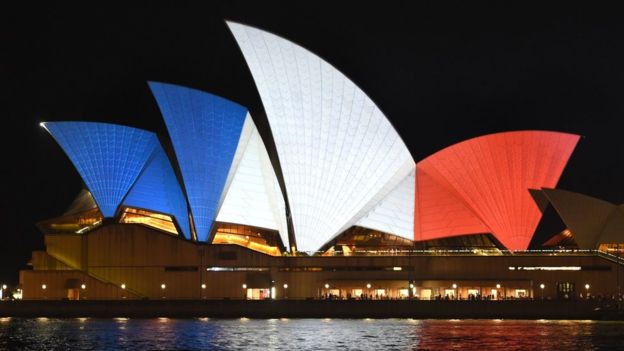 Red, white and blue Floodlights and lighting on buildings across the world? Candles in the bloody wind? Holding hands? What on earth for? The dead as they lie scattered or shattered on the pavements and tarmac streets of Nice?

(The image of a Shanghai floodlit tower, symbol of yet another bloodthirsty regime, is ever-so-slightly toe-curling; especially when it comes to alleged sympathy for a jihadi masscacre!) Spare me!

Instead of raiding known nests of bloody jihadis, or bringing back the guillotine for terrorist treason; they form committees, light ’effing candles, and hold bloody hands!

What should the West be doing? My views, being slightly more robust than some, include the following:-

← Why are our authorities so craven?
Please Don’t Suggest ‘We Don’t Have The Resources’…. →

24 comments for “Towards what, or to whom, are they showing solidarity ?”