The only surviving attacker, Nur-Pashi Kulayev, claimed that attacking a school and targeting mothers and young children was not merely coincidental, but was deliberately designed for maximum outrage with the purpose of igniting a wider war in the Caucasus.
According to this theory, the attackers hoped that the mostly Orthodox Christian Ossetians would attack their mostly Muslim Ingush and Chechen neighbours to seek revenge, encouraging ethnic and religious hatred and strife throughout the North Caucasus . North Ossetia and Ingushetia had previously been involved in a brief, but bloody conflict in 1992 over disputed land in the North Ossetian Prigorodny District, leaving an estimated 600 dead and 50,000 displaced.

Here are the mothers and children [and some men] they thought it was fine to murder:

The one on the left is Basayev, the Chechyen murderer, connected with a group in London which found Polonium had arrived some time later. The one on the right is one of the killers on the day: 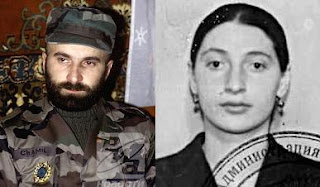 ← and why did you leave your children unattended; Madam?
Nick Cohen Asks The Question…. →