Seems as though ESPN, this massive sports broadcasting conglomerate, has really got its collective knickers in a twist over, well Robert Lee, the football announcer. His job is probably a little bit different to a football commentator in England, I presume. As I don’t know a great deal about any sporting activity, and as American football seems to be full of heavily padded musclemen who slam into each other with seemingly no ill effects, I would really hesitate to comment. But it is a fact that Robert Lee has been pulled from the Cavaliers Sept. 2 game in Charlottesville against William and Mary.

ESPN stated “We collectively made the decision with Robert to switch games as the tragic events in Charlottesville were unfolding, simply because of the coincidence of his name. In that moment it felt right to all parties”

Here is a recent photograph of Robert Lee 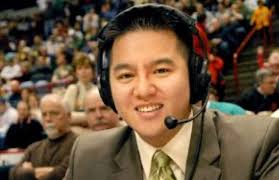 ← We have been here before, and possibly again.
Well, That’s Another Charity Off My Donation List… →