The Guardian delivers its usual hatchet piece about Donald Trump’s Phoenix visit and speech, but once more shows that it just doesn’t understand his devotees, the people he is speaking to and for, and his presence in the White House. The Guardian rambles on, but read the piece, and see if you agree with me that they still just don’t get The Donald; don’t get his appeal for the common voter, and refuse to even admit that they, along with the long list of MSM tv and news publications, might be biased when it comes to the President. 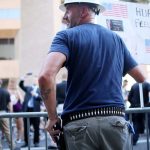 Intriguing photo two-thirds of the way down the article. It pictures a working man’s torso, working man because he is shown wearing a hard-hat, but the emphasis, as far as the Guardian is concerned, is the gun-belt strapped around the man’s waist, belt loops are full of bullets, and the man’s hand is on the butt of his weapon. The printed message below the photos states: ‘A pro-Trump supporter holds a firearm in Phoenix’; but the hidden message of course is ‘rabid gun-carrying red-neck Trump supporter pictured fully armed on street’.

No word about how the guy is, if properly documented, able to carry, openly, according to Arizona gun laws; a weapon. No word about how he is perfectly legally entitled, in every sense of the term to carry his weapon, complete with full load of bullets in belt-loops. Not a sentence explaining that, in America, the sight of this armed man, in certain States, would no more cause alarm or controversy than an evangelist speaking a sermon, or a family barbecue.

← Well, That’s Another Charity Off My Donation List…
Best, most timely advert; ever! →

3 comments for “Man has gunbelt, complete with, wait for it: gun!”