Judge Paul Tain dismissed the 48-year-old’s application on Wednesday, ordering Green, of Berriedale Drive, Sompting, to be sentenced for his crimes next month.

Green junior, 20, of no fixed address, is already serving time behind bars in a young offenders’ institute after being found guilty of three charges under the Fraud Act 2006 and four charges under the Consumer Protection from Unfair Trading Regulations 2008.

Green senior’s wife Julie, who had protested her husband’s innocence, said she was not very happy about the decision and claimed the family had been “fitted up” because of their ethnicity.

Typical, the racist society we live in, keeping the black man dow… 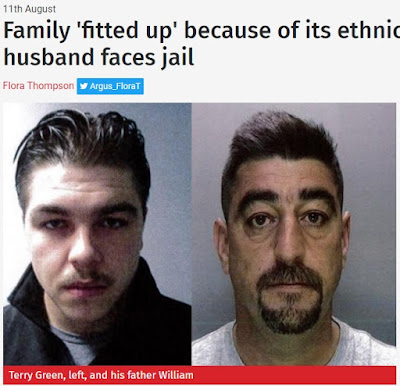 Damn, I think the contrast on my monitor has blown!
So what could she possibly mean? The paper doesn’t say. Is there maybe a clue in the nature of the offences?

The pair were prosecuted after two elderly victims were found to have been substantially overcharged for unsatisfactory work.