I am not on Facebook; nor have I any intention of signing up to that behemoth of rumour, false news and false friends. People who read either these pages, or those upon my own site, or on the ATW blogsite pages, know only that which I publish of my own, my private life. But that is my decision, and the 2-odd billion active users who sign on and tell the world of their shopping trip(e), or what ever else these people fill their time with on Facebook, is entirely their business. My readers know I am a very proud grandfather, and a proud father. They know that my wife is ill, and has been for many a day; and they also know I have strong right-wing beliefs, supporting those whom I believe in. All of my life which is open to those readers is available, and the many things which are private to me are closed off to everyone except close family and friends. Some readers of ATW call me curmudgeonly, opine that my posts are disgraceful: I care not, these are my views, my beliefs, my opinions; and if anyone has issues, they only need to ignore my posts.

So it is that I came upon a story which holds Facebook as a part of that whole, and it is not such a pretty picture. A Breitbart Facebook posting regarding the NFL ‘kneelers’ went ‘ultra-viral’ according to the Huffington Post; and the Director of the Michigan State Police, Colonel Kriste Etue, posted the Breitbart item on her personal Facebook page. For that ‘heinous crime’ of using her Constitutional right to free speech, Colonel Etue was fined five days pay by the Michigan governor  Rick Snyder, who called the post  “inappropriate”.

Here is the Breitbart posting. Is it ‘inappropriate’? I reckon it is ‘Outstanding’! 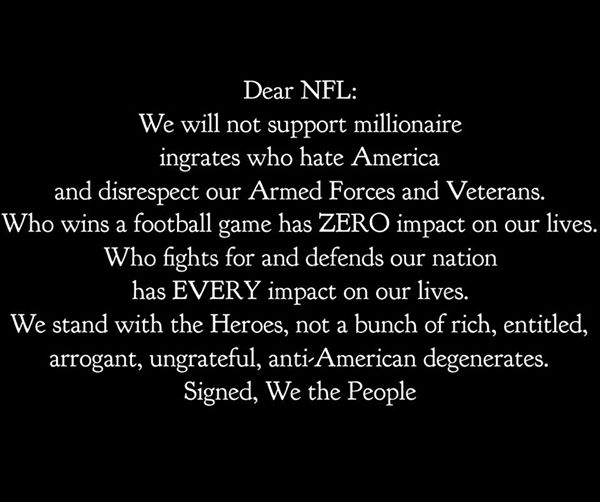 14 comments for “I reckon that’s her ‘unFriended’ then.”