I wrote in July of the tragic and totally-avoidable and unnecessary death of Kate Steinle, shot by an illegal alien from Mexico, whose love affair with America, California, and in particular  San Francisco; and its easy cash, easy laws and supine State’s administration towards illegal aliens made it a demi-paradise for this low-life from below the border.

The Sacramento Bee is covering the murder trial and is mysteriously, or rather not so mysteriously, bang on the side of; not the victim, cut down with only her last words to her father,”Help me, Dad!” which now echo every day in that tormented man’s mind. No, its feelings, those of the Editorial Board anyway, are firmly linked to the murderous Mexican;  Juan Francisco Lopez-Sanchez, a.k.a. Jose Ines Garcia Zarate and the ruthless manner in which he was treated. 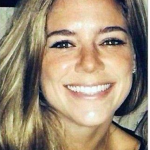 The Bee reckons that San Francisco’s Sanctuary City status, whereby this illegal felon, having served time, was being processed for his sixth deportation, was correct; when the San Francisco Sheriff’s Department dropped a warrant on a drugs charge, and he was instead released into the care of the SFSD. The San Francisco court dismissed the drug charge and the SFSD declined to honour the detainer from the Immigration Authorities; because of the ‘Sanctuary’ policy of the City — choosing instead to release Lopez-Sanchez on April 15. The illegal alien disappears, being street smart, and only surfaces after having ‘found’ a Sig Sauer .40 calibre weapon, that gun having been stolen from a Land Management Ranger’s car. The Sig was discharged, the heavy bullet hit Kate in the back, piercing her heart, and death was just a matter of seconds.

But the Bee reckons it wasn’t Garcia-Lopez’ fault, it wasn’t the lunatic ‘sanctuary’ policy of the smug City of San Francisco, it wasn’t even the Frisco Sheriff who declined to hold this loser for four hours until the Immigration people slapped cuffs on him again; The Bee then opines that Garcia-Lopez must have been mentally-disturbed, and didn’t get any back-up after being released. Hells Gates, for the Bee’ the only person or outfit which hasn’t been exonerated is Kate herself!

Kate’s estate has filed a federal lawsuit against U.S. Immigration and Customs Enforcement, San Francisco County’s former sheriff, the Federal Bureau of Land Management and the man who allegedly fired the deadly shot. Kate’s Law is stymied in the Senate, waiting for a majority.

But the Bee still says, ‘Wait for the trial: innocent until proven guilty!’ Fair enough, but when the ‘guilty’ verdict comes down, will the Bee accept that Kate would still be alive if the bloody Sheriff hadn’t cut the Mexican felon loose, and ignored the ultra-liberal Frisco Sanctuary rules; just for once?

← You open your mouth, you’re taken down
Five more … →

4 comments for “Sanctuary: Safe for 37 days, then escorted abroad…..”