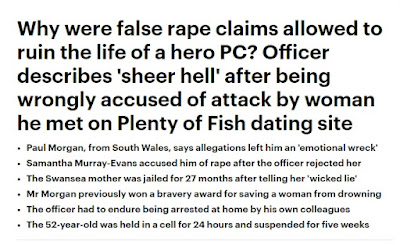 Paul barely had time to change into his sports gear before the first message from Murray-Evans arrived. Most of it is unprintable in a family newspaper. Suffice to say, the sexual encounter made her ‘toes curl’, was ‘awesome’ and she had ‘the biggest smirk’ on her face.

She messaged again at 6.26pm asking if they could meet the following afternoon. Four sexually explicit texts followed, including a photograph of her breasts. At 2.29am, she asked if he was awake. By 8am she was spelling out her sexual fantasies.

Worse was to come. At 2.16pm she texted: ‘I would like to see you again. I thought we clicked. Coffee only, mine, 3pm.’ Paul didn’t reply.
Within three hours, Murray-Evans had bombarded him with six vile messages accusing him, amongst other things, of being a ‘sexual predator’.

All evidence to prove no rape had taken place? Well, yes.

But not to the modern PC-driven, invested in ‘#IBelieveHer’ detective:

‘You try to pull yourself together. You’ve got to go over the facts in an interview, but I don’t trust these people.
‘I’ve shown them the evidence and they’ve arrested me. Are they going to erase the texts?

I thought: “You know I haven’t done this. Why are we going down this route?”’

However, Paul now knows — as do a growing number of innocent men — that it is the issue of consent which is difficult.

Not half as difficult as breaking the ‘Oh, poor thing, she must be the real victim!’ attitude in the State:

Shockingly, despite the overwhelming evidence against Murray-Evans, the investigating officers did not bring a case against her for falsely crying rape until Paul insisted upon it.

And these stories are like buses – two come along at once!

Ms Jakymec added: ‘Rape is a very serious offence and this case should not detract genuine victims of this crime from coming forward and reporting.

‘Our thoughts go to the victim in this case and we hope that this verdict will allow him to move on.’

If you don’t want to deter ‘genuine victims’, start by recognising that the men in these cases are indeed genuine victims. Imagine telling a rape victim that now her attacker is behind bars, she should ‘move on’..!

← Five more …
We have made a covenant with death, →

3 comments for “These ‘Terribly Rare’ Cases…”