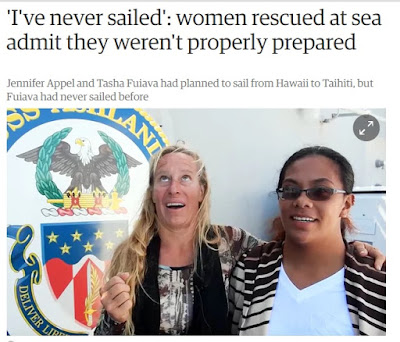 Appel, who has been sailing the Hawaiian islands for a decade, said she had planned the voyage, which should take three weeks, for more than two years but that the pair were perhaps not as prepared as they should have been.

There’s a lot of that about, as MacHeath unfailingly chronicles….

“I had no idea what I was getting myself into,” she said.

“When I asked Natasha, I told her I have no idea what’s going to happen out there and she said, ‘That’s OK, I’ve never sailed.’”

And of course, it’s not called ‘the cruel sea’ for nothing!

The pair, who were accompanied by their dogs, ran into trouble almost immediately when they hit a storm off Hawaii. Their engine was crippled, their mast was damaged and things went downhill from there.

As their sailboat drifted helplessly in the middle of the Pacific for months, their water purifier broke, sharks started ramming their vessel, food ran low and their distress calls and signal flares went unanswered day after day.

It’d take a heart of stone, wouldn’t it?

As the months passed, the pair discovered they were going through their food much faster than they had anticipated. Ninety percent was gone by the time they were rescued, some of it having been fed to their dogs after their pet food ran out.

“The dogs turned out to really like human food,” Appel said.

A few more months, and you might have discovered they like human as food just as much!

Although the US Navy declared the Sea Nymph no longer seaworthy, Appel said she hoped to eventually recover it and perhaps take it out again.

“Well, you got to die sometime,” Appel said. “You may as well be doing something you enjoy when you’re doing it, right?”

← Trump is about to change America dramatically
Don’t cry for me; with supporting cast! →

8 comments for “For Those In Peril On The Sea…”