A West Ham supporter got more than he bargained for after posting homophobic abuse on Twitter.

After Albion’s demolition job at the London Stadium on Friday, a man named Jay, who goes by the Twitter handle @Crezzwel, took to the social media platform.

Naturally, there was OUTRAGE!

Supports of both sides replied with a mixture of anger and mockery, prompting the cocky Hammers fan to respond that he had “hit a nerve” judging by the “fags” that had messaged him.

But you never know who’s watching:

The officer, who follows the club around the country, flatly replied: “Didn’t hit a nerve, just broke the law. Expect a call. Concentrate on supporting your team.”

We should leave our Twitter name pinned to the fridge, so when we have burglars, we can get into a spat on social media with them, and then the police will have to notice? 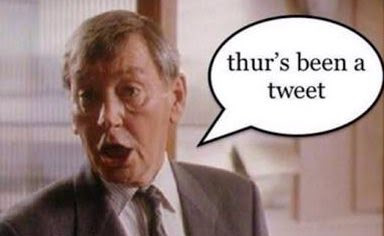 He continued to repeat the offensive comment at which point PC Balkham offered him some advice.

He wrote: “Jay, I would quit whilst you are losing. Be assured I have your full details by now and would recommend we continue the chat off line.”

Amazing! They can’t manage to get hold of crystal clear images of assaults, but can figure out someone’s details from their Twitter profile in minutes?

Twitter users were quick to praise PC Balkham, who has developed a rapport with Seagulls supporters over his years.

I wonder what you’ll all think when you’re burgled, and the police are too busy policing cyberspace for hurty feels?

← Dellers’ hits the mark, and the target!
Yep, my girl-friend needs it to clean her nails. →