“Here, darling, let me show you a picture..” 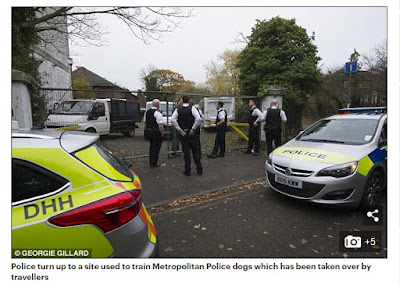 Three police cars with flashing lights arrived at the site on Tuesday afternoon – but left after just 15 minutes when one of the travellers became aggressive.

“Whose streets? Errr, well, if you’re going to be violent, OK, your streets!”

Police told one resident they received more than 30 calls from concerned residents the next morning.
Up to 12 children from the ages of around three to 10 were seen running around the site, screaming, shouting and brandishing sticks. One local said he also saw them pulling down wires and smashing the corrugated iron.
Meanwhile, several of the adults drove truckloads of used utility parts, such as pipes and old washbasins, in and out of the site. Litter was also strewn across the area.

Yes, it’s clearly ‘racism’ that means people object to travellers. It can’t possibly be their actions, can it?

One local, who has lived opposite the site for two years, said: ‘At first I thought they were setting up a movie set. But I wasn’t happy at all when I realised what was going on as I work night shifts and they’re making a load of noise.

‘A load of dogs were running around on the road outside and I could see kids smashing and hitting the corrugated iron and pulling down wires. It’s very disruptive.
‘It’s normally dead quiet here, that’s why I like it. Of all the places, you wouldn’t expect it here – it’s a nice professional area. I’m worried they’ll put up a fight if they’re told to leave.’

Well, see, that’s where you’re going wrong, Mr Local – why work, when you would have far more rights if you didn’t?

Even though police use the land, it is privately-owned, meaning officers can only take action if the landlord has taken reasonable steps themselves to get rid of the trespassers.

Officers said it was the second time they had visited, but admitted they did not know whether the travellers had been given notice to leave by the landowner.

“Us? We don’t know anything. We’re just the police.”

A spokesman for Kingston Council said: ‘The council was made aware on Monday 13 November, of a group of travellers who had moved onto the old Oakhill Health Centre site in Surbiton.

‘The land is privately owned and the land owner is working with the police. We support the Gypsy, Roma, Traveller community within Kingston and have a permanent, licensed site with 18 pitches.’

Maybe you should support the taxpaying residents and workers instead? Just a thought.

← The Hidden Camera never lies
You can fool all of the people; all of the time →