Toy model manufacturer Revell agreed to discontinue its model of the Haunebu II Flying Saucer, described as “the first object in the world capable of flying in space.”

According to the product description, the Nazi aircraft never made it past its 1943 test stage due to World War II.

Ah, nostalgia! I fondly remember pasting those little transfer decals on models when I was a child…

Thing is, none of that is true.

Oh! *comes back to earth with a bump*

Well, what’s the problem with that?

The fact that Revell’s product’s description fails to mention the aircraft never existed is risky in that people who buy it might actually believe the Nazis possessed superior technologies, (said historian Jens Whener of the Military History Museum in Dresden, Germany).

“Enthusiasts can use this as a strategy to cast doubt on what we know today about National Socialism,” the historian said.

The company said it agrees with the MHM, adding that “it is in fact a legendary, extraordinary aircraft which cannot be proven in terms of its existence.” 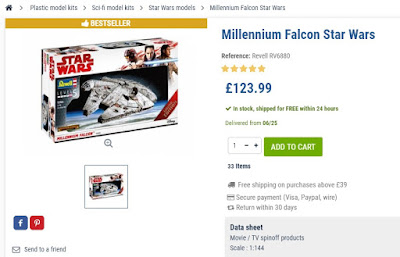 If this can go on sale, then surely so can the Haunebu II. Just make it clear on the packaging.

And stop listening to people with obsessions so strong they demand a harmless model kit be removed in order to prevent the rise of the Fourth Reich!