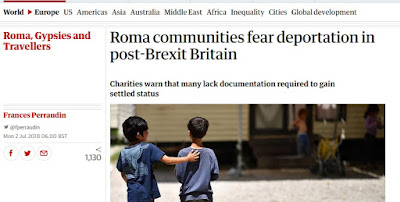 Last month, the home secretary, Sajid Javid, said that EU nationals would be asked to answer “three simple questions” in an online form to continue living in the UK once it has left the EU.

Applicants will be asked to prove their identity, that they have no convictions and that they currently live in the UK.

Charities working with Roma communities across the UK have said that although most Roma are EU citizens and have the right to be in the UK, many are illiterate, would struggle to provide paperwork and do not have access to computers or smartphones.

Martin Burrell, chair of the Luton Roma Trust and Mihai Bica, from the Roma Support Group seem to not want to be out of a job, don’t they?

The Roma are traditionally a travelling group of people and are one of Europe’s most marginalised groups. Many came to the UK in the 1990s to escape persecution in eastern Europe. After the expansion of the EU in the 2000s, more Roma have arrived in search of a better life.

A ‘better life’ that doesn’t include learning the language, gaining qualifications, and finding work in order to buy the things that people tend to buy, eh?

“The UK has been a welcoming place for so many communities and it has improved the lives of Roma a lot after their arrival here.”

How exactly has it done that, then? Since they remain as illiterate and itinerant as in their countries of origin?

And don’t take advantages of the basic services like proper refuse collections?

A Home Office spokesperson said that throughout the application process the government would be looking for reasons to grant, rather than to refuse, settled status.

← Late summer 2017: Sessions blithely sweeps past Trump’s ire
It’s what we know that just ain’t so →

9 comments for “Bug Or Feature?”