Ann Bradley, from Harwood, Lancashire, awoke in the early hours of August 27 last year to find her son, Louie Francis, ‘white and floppy‘ in her arms.

She went into the corridor at the Royal Bolton Hospital with her newborn baby in her arms to find a midwife, but attempts by doctors to resuscitate Louie were unsuccessful.

Assistant coroner John Pollard has now slammed advice given by midwives who taught Ms Bradley, a teacher, a feeding technique which involved lying side-by-side in bed with him.

Mr Pollard said that the technique to help mothers struggling to breastfeed went against national advice to avoid ‘co-sleeping’ because mothers are likely to be very tired after giving birth and at risk of falling asleep.

This is yet another case of the Breastapo forging on ahead despite all signs pointing to a disaster waiting to happen.

Mrs Bradley, a first-time mother, told the court she was never told not to lie in bed while feeding, and that she chose to stay in hospital an extra night because she was having difficulty breastfeeding.

She said: ‘I was happy to stay. I felt it was a good idea because of how badly the breastfeeding was going.’

Jane Westhead, the midwife who taught Mrs Bradley the technique, said that bed sharing is discouraged and bed safety awareness is discussed.

The midwife, who had worked at Royal Bolton Hospital for nine years at the time of the incident, referred to specific guidelines about bed sharing in her evidence, but the coroner said that advice given had been contradictory.

Which is a polite way of putting it, I suspect.

Angela Helleur, a midwife expert and chief nursing officer for Lewisham and Greenwich NHS Trust, told the coroner that it is ‘common practice’ for midwives to advise on breastfeeding in bed.

She said: ‘We haven’t got much option in terms of where the breastfeeding occurs. The important advice to give is if women feel tired or sleepy to put the baby back in the crib.’

It’s often said that if you feel sleepy when driving, you should pull over. But it’s recognised that this is not enough, and so tachographs are fitted to commercial vehicles. That way, it’s harder for companies to force tired drivers to keep going.

Pity the ‘breast is best at all costs’ advocates aren’t similarly hindered.

The coroner also expressed concern that breastfeeding in bed would sometimes happen, at a mother’s request, with the curtains drawn around the bed, meaning problems could not be noticed quickly.

Mrs Westhead said this happens because women don’t want people walking past while they are breastfeeding.

The comments section seems to have the answers: 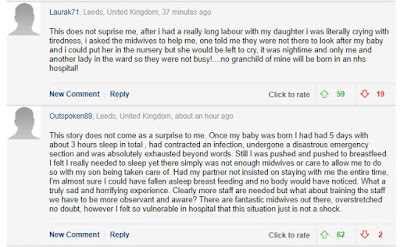 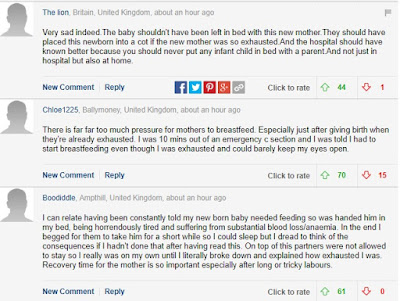 But we’ve seen how the madwives take criticism. So I expect they’ll weather this storm too. After all, they have ideology to promote.

You have to expect casualties in an ideological war, after all.

← Mollie Tibbetts
The coming of Scomo →

4 comments for “Ideology Over Safety”