A school secretary has been found guilty of hitting a pupil.

…and don’t get arrested! I can’t say I like this modern aphorism.

How badly did this elderly woman beat this poor little child anyway?

Southampton Magistrates Court heard how Farmer, 57, stepped in to help the student move from one room to another on January 22 this year.

Alison Collier, a school staff member, giving evidence, said she saw Farmer raising her arm and hit the victim, who cannot be named for legal reasons, on his upper arm.

Hmmm, it’s her school staff colleagues that are rushing to dob her in? Ism’t that a little fishy?

Alison Zebede, giving evidence, told the court she was 15 feet away from Farmer and the victim and said she heard a smack.

Ms Zebede, who also works at the school, added: “It was a clear smacking sound to me. The sound of somebody being hit on a bare skin.”

Farmer told the court the victim was “moving slowly towards her” when she was in the room and “had his back towards her”.

She added: “There was a chair by the door. I’m pretty sure I said stop, stop and he didn’t do that so I instinctively put my arm up to stop him. He was getting quite close to the doorway and he was still not turning around.”

Seems fair enough. But clearly not to the magistrates.

Charles Cochand, defence, described Farmer as a “trusted and much-loved” member of staff, experienced in dealing with children.

Farmer, of Brook Avenue, New Milton, was released on unconditional bail. She is due to be sentenced at Southampton Magistrates Court on September 25.

Well, that’ll be one to watch. The comments are – unsurprisingly – illuminating. 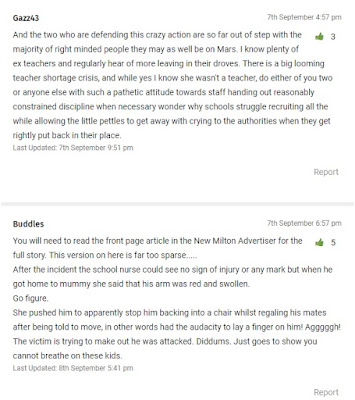 And we wonder why we have a youth problem.

← Today’s rape quiz
It starts with the triangle →