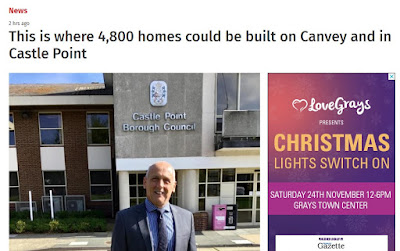 “Yes,” I thought, “The council buildings are just the place to knock down and build houses…”

But turns out that was just the ‘Echo’s’ photobank! In reality, it’s yet more greenbelt being concreted over.

Locations for all the proposed sites, set to be developed over the next 20 years, have been released, with 1,399 set for Canvey across nine sites, and 2,823 for the rest of Castle Point across 20 sites – with room needing to be found for at least 600 more.

A number of green belt sites have been released under the plan, but the council has insisted it is attempting to keep the number of homes on green belt to a “bare minimum”.

Where exactly do the council think all these extra new residents are going to want to shop and school their children and visit doctors? Where will they want to use buses and trains and roads?

Would it be the already overloaded services in the south east?

The council will meet next Wednesday, with the aim of approving the 230 home a year plan…but government inspectors have now made it clear they will intervene if it is rejected – upping the count to 342 per year.

I wonder if those government inspectors live where they demand these houses are built? I suspect the answer’s ‘No’.

Castle Point Council leader, Norman Smith, admitted that no councillor will be happy with the plan, including himself, but stated the alternative is much worse.

How could it be?

← Why on earth is she not walking away?
Why did those houses burn but not the surrounding trees? →