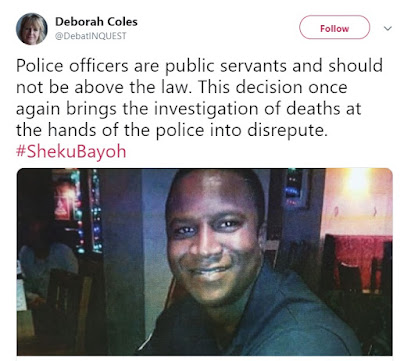 The ‘decision’ this dim cow is outraged about, and claims it shows police are ‘above the law’…? It was made by a court.

The police watchdog had refused to allow PCs Nicole Short and Alan Paton to retire on medical grounds until it was known if they would face criminal charges as a result of the incident.

But Lord Woolman has ruled the authority’s reasons “do not add up”.

In other words, the law – in the persona of Lord Woolman – decided otherwise. How this is somehow showing that the police are ‘above the law’, heaven only knows.

What’s this case about, anyway? Was he just innocently walking down the road?

The account of events from PC Short states she she feared “a murder was about to take place” .

The 32-year-old told how she believed colleagues had used CS and PAVA spray on Mr Bayoh but noted that he reacted to it by “laughing and wiping it away from his eyes like it was just water”.

PC Short said another colleague again used spray on Bayoh but it continued to have no effect, prompting her to draw her police baton as he allegedly walked towards her.

Good lord! What could have brought this about?

On the day he died, Mr Bayoh had been at a friend’s house in the morning watching a boxing match.

He had taken the drugs MDMA and another drug known as Flakka. The drugs dramatically altered his behaviour, and he became aggressive with a friend.

He later left home with a knife from his kitchen, and neighbours called the police.

Clearly, a lovely man. With a lovely family.

A gravestone donated to the family of Sheku Bayoh has been ripped out and dumped with the couple who helped fund it.

Lynne and Jim Hume were devastated to discover the family of the 31-year-old – who died in police custody – had decided to remove the headstone in a row over its colour.

Heh! Ingratitude seems to be a hallmark of these cases, doesn’t it?

4 comments for “It Was ‘The Law’ That Made This Decision, You Idiot!”