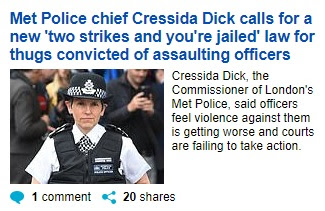 Cressida Dick, the Commissioner of the Met Police, said officers feel violence against them is getting worse and courts are failing to take action. 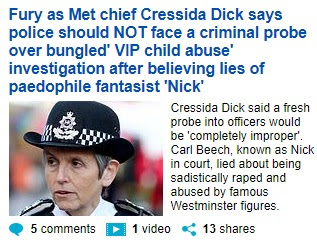 Referring to her predecessor Sir Bernard Hogan-Howe, who has refused to comment on Sir Richard’s intervention in the Mail, Miss Dick told the London Evening Standard: ‘I’m not going to personally judge what people did. I believe we have learned lessons.’

Not until the courts take action, you haven’t. I hope you are sued personally. The taxpayer should not be on the hook for this ghastly travesty of justice.

← Parliament versus the people
Two of Trump’s recent leakers profiled →

6 comments for “A Complete Dick…”