“…when we aren’t facing a little old lady going for a second walk.” 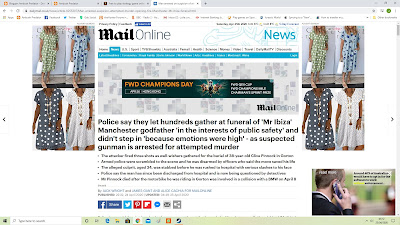 Am I being too harsh? Because that’s basically what this supine fool is saying, isn’t it?

Superintendent Rebecca Boyce from Greater Manchester Police later addressed questions about why such a large groups (sic) had been allowed to gather despite the coronavirus lockdown.

She said: ‘We were made aware of several gatherings taking place yesterday in Gorton in relation to a funeral. In the lead up to the funeral, officers engaged with the immediate family of the man who had sadly lost his life to explain the government guidelines and to discuss details of their plans.’

‘Engaged with’ and ‘explained’ and ‘discussed’. Not the usual gangbusters approach they employ when they think it’s someone who won’t fight back, is it? No mention of fixed penalty notices being issued.

‘A careful assessment was then made about the policing approach to any gatherings associated with the funeral. Our overriding priority was to ensure that the wider public were kept safe.

‘We continued to closely monitor the situation and as it progressed it was clear that the emotions of those at the gathering were high and therefore a decision was made, in the interests of public safety, not to intervene unless the wider public were put at risk by the groups.’

So, if you’re a lawbreaking type and there’s enough of you to make things awkward, you get softly-softly policing. If you aren’t, then they’ll feel free to behave like jackbooted thugs.

Hell, that’s not even the subtext here – that’s exactly the clear message given out.

What the hell happened to law and order, policing without fear or favour? Did it go out the door when we started recruiting the likes of Rebecca Boyce?

← ‘Influencers’ or tossers?
Boris is a man in thrall →

4 comments for “Translation: “We’re Too Scared To Act… “”