Matthew Ashton, lead director of public health for Food Active, a healthy weight campaigning group funded by local authorities, and one of the signatories, said it was not enough just to recruit the TV fitness coach Joe Wicks to get the nation’s schoolchildren moving, as some newspapers have suggested is on the cards.

It’s a strangely Puritan outlook that food that tastes good but that ‘doesn’t do us any good’ (how, exactly, does it have negative calories?) should be regarded as suspect.

Do you suppose Matthew breakfasts on plain boiled wholemeal rice and tap water? 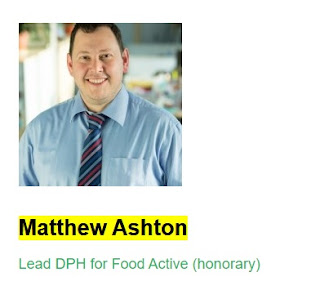 “Clearly physical activity has to be a key part of the strategy, but it is the one we always point at. Commercial sponsorship of sports – the likes of Mars, Coca-Cola, Lucozade – those kind of things which are high-energy, high-input products – kind of get away with it by then supporting physical activity opportunities in the community. But actually it would be so much better if we didn’t have the stuff going in in the first place.”

Yes, Matthew is in full on Puritan mode here – he admits the company sponsorship supports physical activity, but it’s wrong to do so because it also provides something people enjoy. Calisthenics before dawn shouldn’t be pleasurable!

What is needed is cultural change, he said, so that people don’t grab food on the go while rushing about their daily lives, and have “a takeaway on your lap in front of the telly”. Ideally we would have meal times with our families, where people tend to eat more slowly and can engage with other people, which promotes not just healthy bodies but healthy minds, he said.

But how many 2.5 kid families still exist to sit down together, thanks to your cronies?

“My concern is that we do what we’ve always done,” he said. He didn’t want the plan to assume that “we’re a nation of fatties and that’s for individual responsibility to sort out by getting off your backside and going for a run in your park,” he said.

God forbid personal responsibility ever be considered the answer to anything! Because then people like Matthew might be out of a job…

2 comments for “The Family System You And Your Cronies Worked So Hard To Destroy..?”